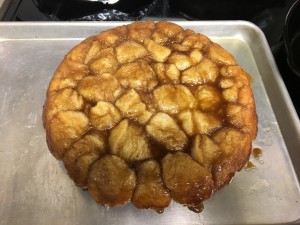 Last night our neighbor had some leftover dough. She brought it over to share with us. The dough inspired me to make Cinnamon Pull-A-Parts.

Since it was late in was late in the evening, I just put the dough in the refrigerator until morning.

The next morning I took a castiron skillet and melted some butter in it.  I topped the butter with a cup of vanilla sugar.  I could have used cinnamon sugar, but I wanted to tame the amount of cinnamon.  I then divided up the dough into golf ball or smaller pieces.  I dipped each piece into some melted butter and then rolled it in some cinnamon sugar.  Any sugar I had left went on top of the rolls.  I let the rolls rise for about an hour.  I baked them at 375° F for about 25 minutes. Once they were out of the oven I turned the rolls out of the castiron skillet to cool.  Once the sugar had cooled below molten lava temperatures, I served them up.

My crew agrees that I can do that again. 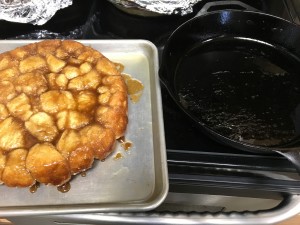